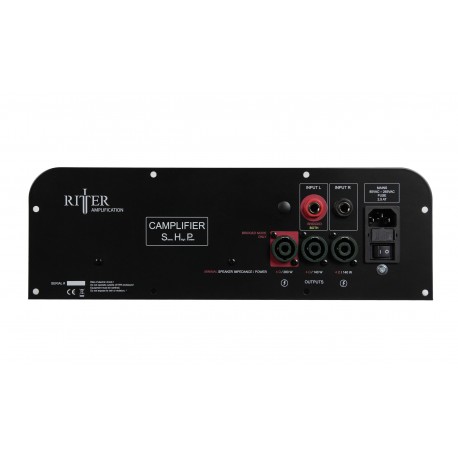 With 2x140W* you are prepared for all band rehearsal and live situations.

If you want, you can play the next open-air festival in stereo.

*The maximal power the Camplifier SHP can deliver is limited by the max. power capabilities of the internal power supply only.

That means that power is independent of the speaker cabinets impedance, which is connected to the Camplifier (4+8+16 ohms).

For example: A single cabinet on one of the stereo channels can get max. 280watts, no matter of its impedance (4, 8 or 16ohms).

If two cabinets are connected to one stereo channel each, the 280 watts will be distributed to these two cabinets (2x140watts).

The bridged mono output will also deliver 280 watts “only”, but it will work with double the internal voltage levels than the stereo outputs and therefore its burst power (power which can be delivered without distortion or compression for a short time) will be more than double the burst power of each stereo channel (1250 watts).

All below customer reviews of this product until the 14th of August 2018 were made for the Camplifier 360 !

The unit has transformed my Kemper rig.
To outline how I use it ( I have three kempers)…
I use the full FRFR main outs to a pair of powered FRFR cabs in front of me in stereo to get the full benefit of the profiles and I use the monitor out/s in either mono or stereo feeding the camplifier which drive either one (mono) or two (stereo) Mesa boogie EV 12l thiele cabinets for live work.
I sound check with the camplifier turned fully off, adjust the master outs until I am happy with the FRFR sound then simply reach behind and dial in the camplifier/ live cabs until it’s ‘in the room.’
In the KPA output section, I run the main FRFR outs 5 db lower than the monitor out. This gives the camplifier a bit more to work with but it’s more than loud enough.
Great unit !

I was really impressed by the power of this small amp, also very fast and easy installation!

Super easy install, Great fit with Kemper Toast and Perfectly noiseless. The Camplifier Strereo High Power is absolutely amazing product that I never ever had before. Highly recommendation.

Hi Tilman,
I bought you the High Power Stereo Camplifier and I would like to know its maximum power consumption in order to be able to place it behind an inverter and thus improve it.
Do you have this information?
Thanks a lot, your product is fantastic !
Regards
Grégory

I have successfully installed the Camplifier 360. I hooked it up to an old H&K 4x12 with budget speakers and already I’m completely blown away by the quality of the amp!
Rehearsal is coming up on Thursday (using my trusty Marshall 1960 4x12 G12T75) and I can’t wait!

My previous power amp I used with the Kemper was the Matrix GT1000FX, but your product is so much more responsive, even on low volume.
The volume is extremely loud, a lot of headroom and definitely on par with the gt1000fx.
I can’t thank you enough for creating this exquisite piece of hardware, my favourite profiles all have come to live! I just can’t stop playing...

A great product. You will be amazed how your profiles will sound through your camplifier 360.
I strongly recommend to use it in stereo.

Thank you Tilman for this great product and keep up the good work!

Sounds really good, build quality is excellent. It needs 5 minutes to install. It looks great. Use it with my band for big festival gigs and tours over the world. Great product!

Brilliant amp, with lots of headroom.
The best you can get for your Kemper toaster.
Works very good with my two Bogner cubes!
Mr Ritter is very helpfull and I hope a lot of these amps end up in the Kemper profiler.

Very impressed with the build quality as well as the sound of the Camplifier 360 . Have been using it for over 6 months of hard gigs , many of these have been outdoors in tropical weather and it has held great . Enough power even using one side with a 12 inch speaker in many, many occasions .
Customer Service , well ... Mr Tilman was kind enough to call me personally to Puerto Rico after I had problems my email carrier .

It took some time before I eventually bought a Camplifier 360 for my unpowered Kemper although it's got a lot of praise on the Kemper forum, but I'm soo happy that I ended up with this solution.
It's simply a beautiful piece of work all the way! The attention to detail and the product itself just screams quality, right down to the packaging of the goods... :-)
I'm always concerned about fans, but this one is really quiet and a non issue. The fan in my Mesa Mark V 25 is really bugging me, but I don't even think about this one. The sound is stellar, and it was a remarkable difference in clarity and response compared to my previous "external" Solid State poweramp. It's a perfect match with my Marshall 1960 cabinet which is stereo, and there's absolutely no lack of headroom. This thing can get loud if yuo want/need!
The customer service is also top notch so I'll highly recommend this product to anyone with an unpowered Kemper. I couldn't be happier, and I've actually ordered a second 360 for my "bakcup" Kemper...

Sounds great, lots of power, very good quality and with two speaker cabs great for stereo use of your Kemper

The best of the best!

Beautiful build. Absolutely incredible headroom. The Camplifier 360 turns your Kemper KPA into a live 'dream machine". I'm so glad I bought the unpowered KPA and chose this option for my amplification. 15 days from order date to being in my hands, and that's from Germany to USA. Tilman Ritter gave great communication and his customer service is 5 star. Thank you so much for such a great product. You have earned a long term customer!